In Memory of
Alvin A.
Bowman
1925 - 2021
Click above to light a memorial candle.
This Book of Memories memorial website allows family and friends a place to re-visit, share and enhance this tribute for future generations.
Open Full Navigation
Family Interactive Login
Close
Menu
Click here to
Send
Flowers

Obituary for Alvin A. Bowman 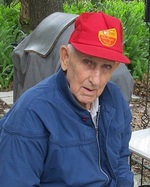 His early schooling was in Eau Claire; graduating from Niles High School in 1943. Following his schooling he served and was honorably discharged from the US Army.

On September 1, 1945 in Cassopolis, Michigan at the parsonage of the United Church; he was married to Irma Jean Hartman, daughter of Lester F. Hartman and Flora (Moore) Hartman. Together they raised three children.

Alvin was employed by Studebaker Corporation and Place & Company Builders; in South Bend, Indiana, and retired from Henkel & McCoy in Elkhart, Indiana. He was a member of Pleasantview Church of Christ in Cassopolis. A life member of the Edwardsburg Conservation Club, a hard worker and steadfast friend; enjoying hunting and ice fishing with family and friends.

He is survived by sons, Larry (Nancy) and James (Carol) Bowman; both of Edwardsburg and their daughter Kathy (Bill) Purdy-Knight, of Eustis, Florida; who lovingly provided care in their home for the last several years. He is also survived by four grandchildren, eighteen great grandchildren and six great great grandchildren, many nieces and nephews, as well as a brother-in-law, Don Hartman, of Arizona and a sister-in-law, Lois Bowman of Cassopolis.

According to his wishes, cremation has taken place and interment will be at Brookside Cemetery, Dailey, Cassopolis, Michigan. A memorial service will take place in Michigan at a later date.
Memorial contributions may be made to the American Heart Association.

Arrangements are being provided by Beyers Funeral Home, Umatilla, Florida.


To send flowers to the family or plant a tree in memory of Alvin A. Bowman, please visit our Heartfelt Sympathies Store.