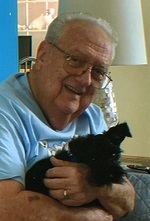 Herman W. Walder, Jr. was a loving husband, father, grandfather, and a friend to many. He left this world on April 3rd, 2021 after a short serious illness in The Villages Hospital at age 87. He was born to Herman and Anna Walder on December 9th, 1933 in Paterson, New Jersey. He spent his early years in Preakness, New Jersey.

He was known for his speed skating and in his high school years in football, track and entertainment with a country band. Herman graduated from Pompton Lakes High School in 1951 and then served in the U.S. Air Force. In October 22nd, 1955 he married his childhood and high school sweetheart Betty Lou Knauss. He celebrated 65 years of marriage with her on October 22nd, 2020. He was the father to Herman W. III, New Jersey, Karl A., Colorado, two grandchildren Devon (Walder) Zanca, Brooklyn, New York and Karl A. II, Colorado. Herman was employed as a Tool and Die Sales Representative for 35 years. He was active in The Villages for 22 years.

He was a member of the Tri-County Fly Fishers, The German American Club, Guys and Dolls III Golfing
Group and Ole Golf and Social Club. Herman loved The Villages, loved the Alhambra Social Club and the
many members. He loved the laughter and the song, and most of all the good life.

Due to current restrictions a Memorial Service will be held at a later date.


To send flowers to the family or plant a tree in memory of Herman W. Walder Jr., please visit our Heartfelt Sympathies Store.