In Memory of
Robert A. "Bob"
Peppers Jr.
1935 - 2021
Click above to light a memorial candle.
This Book of Memories memorial website allows family and friends a place to re-visit, share and enhance this tribute for future generations.
Open Full Navigation
Family Interactive Login
Close
Menu
Click here to
Send
Flowers 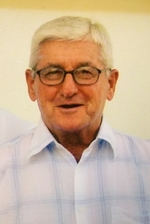 Bob Peppers, 85, passed away March 26, 2021 surrounded by his family after struggling with Parkinson disease. Just like he dealt with all experiences in life, Bob managed his illness with strength and grace. He was the co-owner of Peppers Plumbing, the oldest of eight boys, loved to hunt and fish, a huge Gator fan and was the patriarch of the Peppers family.

He is survived by two brothers, Dan (Kathy) Peppers, John (Judy) Peppers and preceded in death by his brothers, Jack, George, Jim, Tom and Leroy Peppers.
Bob will be laid to rest at the Florida National Cemetery in Bushnell, Florida. His life will always be remembered and his love will be in our hearts forever.


To send flowers to the family or plant a tree in memory of Robert A. "Bob" Peppers Jr., please visit our Heartfelt Sympathies Store.