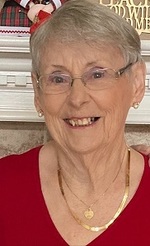 Mary Elizabeth Sullivan, better known as “Emmy” to those closest to her, died peacefully on Sunday, February 21st, 2021, while holding the hands of her two sons.

Emmy graduated from Waltham High School in Massachusetts in 1951 and spent many happy years in Londonderry, NH raising her family with her husband of 50 years, Al, and working as a bookkeeper for multiple electronic and technology firms. Emmy and Al retired to the Villages in 1997, where Emmy continued to live life to the fullest. She taught water aerobics, was active in knitting and card playing groups, and learned to play golf, which she played multiple times a week up until very recently. Emmy’s golf highlight was hitting a hole-in-one in 2006. Emmy was also a proud New England Sports fan, consistently cheering on the Patriots, Red Sox, and Bruins. Most of all, she loved her visits up north to spend time with her family, both in NH and with her husband’s family in Tennessee. All will miss the energy and enthusiasm Emmy brought to all aspects of her life, even at 87 years old.

A mass to celebrate Emmy’s life will be held on Friday, February 26th at 8:30am at St. Timothy’s in Lady Lake, FL. A livestream of her mass will be shown at https://sttimothycc.com/formedorg.
In lieu of flowers, donations can be made in Emmy’s memory to the Juvenile Diabetes Research Foundation www.jdrf.org.

To send flowers to the family or plant a tree in memory of Mary Elizabeth "Emmy" Sullivan, please visit our Heartfelt Sympathies Store.