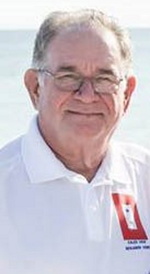 William Maurice Banta, Bill to his family and friends, passed at 8:00 pm on Saturday, January 9, 2021. Bill was born on December 13, 1944 in Charleston, South Carolina; he was 76. Bill leaves behind his loving wife of 54 years, Glenda Banta of The Villages; daughter ChrisAnne Shultz and her husband Arnold of Orlando, son Guy Banta and wife Shelly of Wauseon, Ohio; grandchildren Rachael Shultz of Tallahassee, Caleb Shultz and wife Kayla Shultz of Meyersdale, PA and Benjamin Banta of Napoleon, Ohio; and great-grand-children Cameron and Bradon Shultz, also of Meyersdale, PA.
Bill graduated from St. Theresa High School in Decatur, IL in 1963. He went to work for the Norfolk Southern Railway right out of high school and retired in 2000 after working his entire career for the railroad. He and Glenda then moved to The Villages. In The Villages, Bill participated in softball, golf and bowling. He achieved two 300 games, each bowled at Spanish Springs, and one hole in one.
Bill’s largest source of pride was always his family and the accomplishments of those he loved. Bill served our county in the Army Security Agency during the Vietnam War. His grandsons both followed him into military service.
Bill will be remembered for his kind spirit, generosity, love, humor, and sarcasm. His legacy lives on through all those lucky enough to have known him.
The family requests that all gifts be made to Hospice of Marion County or to cancer research.

To send flowers to the family or plant a tree in memory of William Maurice Banta, please visit our Heartfelt Sympathies Store.