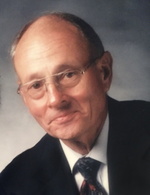 Robert (Bob) Graves passed away on January 8, 2021 with his wife Gail, by his side at their winter home in The Villages, Florida. He was born on October 1, 1933 in Pontiac, IL. He graduated from Hillsboro High School and went on to receive a B.A. in Music Education from Illinois State University. He served 2 years in the First Infantry Division Army in Fort Riley, Kansas. He began his career as a band director at Mid-County Schools in Lacon-Varna, IL, and then moved to a position of music director at Thornton Fractional High School in Lansing, IL. After receiving his M.A. in Education Administration at Illinois State University he became the principal of Schrum Memorial School in Calumet City, IL for 23 years before retiring. Music has always been a part of his life, playing trombone in a college dance band, “The Dreamtimers”; Army band and dance band in Ft Riley, Kansas; Adult Band in Munster, IN, Joliet Jazz Band, and Concert Bands in The Villages, FL.

Bob was a man of faith and an active member of several Christian Churches throughout his life. He served as a deacon and elder, involved in music ministry, and served on building and missions committees.

He was a member of Illinois Education Association, American Federation of Teachers, Illinois Federation of Musicians and Illinois State Administration Club.
He was elected to serve on the Illinois Elementary School Association Board of Directors in the mid 1970’s, which was instrumental in initiating Girl’s Volleyball to interscholastic statewide activities at the elementary and junior high school levels in IL.

He enjoyed camping across the U.S. with Holiday Rambler friends, golfing, watching sports, and attending all his grandchildren’s activities.

A celebration of life will be held at a later date. Memorial Donations can be made to New Life Christian Church World Missions, The Villages, FL in memory of Bob.

To send flowers to the family or plant a tree in memory of Robert C. "Bob" Graves, please visit our Heartfelt Sympathies Store.