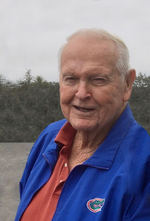 Amaziah Pilcher Burdorf, loving father, husband, grandfather, and friend, age 87, of Leesburg, Florida, went home to be with the Lord on Tuesday, December 1, 2020, with family by his side. Mr. Burdorf was born December 7, 1932, in Ft. Gaines, Georgia, to Edward and Opie (Fain) Burdorf.

He attended Leesburg High School, in Leesburg, Florida, graduating in 1950, and continuing his education at the University of Florida in Gainesville, where he was a defensive end on the team. After attending for one year, he enlisted in the United States Air Force, where he continued living his dream of playing football. Unfortunately, he sustained an injury, which honorably discharged him from the service.

He then began working alongside his dad, Ed, where he learned the construction trade and served his community as a construction superintendent and master carpenter until he was well into his 70’s. You cannot drive through Leesburg without seeing something he has built through the years. His work ethic, attention to detail, and spirit of excellence is reflected in everything he did.

He enjoyed coaching flag football, as well as umpiring Little League baseball, which he did for over 30 years. He loved building model airplanes, working on building projects around the house, cheering on the Gators, eating at Sonny’s and Wolfy’s, and serving Jesus.

He is preceded in death by his father and mother, Edward and Opie Burdorf, wife Joan Burdorf, and wife Peggy Dickson, as well as grandson Jason DeBay, who leaves behind his widow Whitney Preuninger.

In lieu of flowers, donations may be made to the following:

To send flowers to the family or plant a tree in memory of Amaziah Pilcher Burdorf, please visit our Heartfelt Sympathies Store.