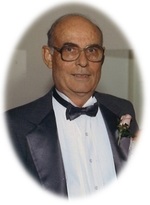 Robert John “Bob” Hunt 94, of Fruitland Park, Florida passed away at home on Monday, November 30, 2020 surrounded by family. Born in Fruitland Park, he was a lifelong resident of Lake county. He attended Leesburg High School before serving in the Navy in WWII in the Pacific. After the war he returned home, where he and his brother were pilots who operated a local airport, he was involved in the fernery business in Yalaha, and owned citrus groves. He married the love of his life, Jackie on April 9,1949 and together they raised two sons and a daughter. He worked at the local Minute Maid juice plant for over 30 years, retiring from Coca-Cola Foods as plant manager in the mid 1980s.

A private graveside service will be held at Shiloh Cemetery in Fruitland Park. For those who wish, memorial donations may be made to Cornerstone Hospice.

Condolences may be left at www.beyersfuneralhome.com, Beyers Funeral Home and Crematory in charge of all arrangements.


To send flowers to the family or plant a tree in memory of Robert John "Bob" Hunt, please visit our Heartfelt Sympathies Store.