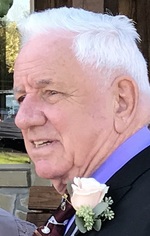 Edward William Slyman, 90 – Husband, Father, Grandfather, and Great Grandfather - passed away on November 21, 2020 in The Villages, Florida. “Eddie’ was born in Brooklyn, New York on October 25, 1930, as the second of nine children.

Born and raised in Brooklyn, he graduated from Erasmus High School. Following high school, he continued to work for a local butcher where he started as a delivery boy and became a full-fledged butcher.

In 1951 Eddie enlisted in the United States Navy, during the Korean War as a boatswain mate. In his four years he served on the 6th Fleet staff and embarked on the USS Newport News (CA 148), the USS Des Moines (CA 134), USS Salem (CA139), and the USS North Hampton (ECLC-1). He spent much of his deployed time in the Mediterranean Sea with the 6th Fleet. He was honorably discharged in July 1955.

On November 26, 1955, he married Anna Slyman from New York City and moved to New Jersey. There they started their family, raising four children. Starting as a technician and becoming an engineer he worked for Singer Kearfott for 30+ years making an impact on numerous defense programs during the Cold War, most notably the Trident missile program.

“Eddie” was well known for his work ethic at Kearfott, at home in his workshop, and in his volunteer endeavors. He threw himself into every project he took on. In his different circles he was always known as someone you could count on to get things done. He was a valued member of the St. Francis Church community in Haskell New Jersey, a football coach for the Wanaque Warriors, and the fastest ice skater on Rainbow Lake.

His family and friends remember him as an avid NY Giants fan, the family photographer, and a skilled woodworker. As a Giants’ season ticket holder, he celebrated two Super Bowl wins. He always had a camera in his hand making wonderful memories for his family and friends. His grandchildren and great grandchildren have been the recipients of many unique woodworking projects made personally for them with love.

With the love of his life, Anna, they moved to The Villages in 2000 to continue their adventures in retirement. Together they shot pool regularly as members of the billiards club, were members of St. Timothy’s Catholic Church, and took multiple cruises with community members, Life was good for these two snowbirds, traveling back to Pennsylvania each summer for the hot summer months.

The Funeral Service will be at 8:30 a.m. on Tuesday, December 1, 2020 at St. Timothy’s Catholic Church, Lady Lake Florida, with military honors. A private interment will follow at Florida National Cemetery in Bushnell, Florida.

To send flowers to the family or plant a tree in memory of Edward William Slyman, please visit our Heartfelt Sympathies Store.