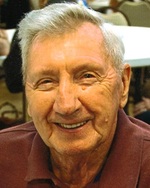 Arnold E. Laabs, 91 of The Villages, Florida passed away peacefully on October 28, 2020 at The Villages Hospice House in The Villages, Florida.
Arnold was born August 3, 1929 in Theresa, Wisconsin to the Reverend Herman and Marie (Kallsen) Laabs. He was one of 11 children. Arnold was confirmed in the Lutheran church June 6, 1943. He married Florence Krueger on June 21, 1953 in Lebanon, Wisconsin. They recently celebrated 67 years of marriage. Arnold wanted a large family and they raised 6 children.
After their marriage, Arnold worked for the West Bend Company for 14 years. He then made a career change and began working for the Soo Line Railroad as an agent that lasted 31 years. He retired in December 1991. His career in the railroad took him all over Wisconsin and Upper Michigan. As a result he and his family moved a number of times taking their mobile homes with them. After his retirement they moved to The Villages, Florida in 1993.
Arnold and his wife are charter members of Hope Lutheran Church in The Villages, Florida. Throughout his life he served the Lord in many church related capacities including Sunday school teacher, Sunday school superintendent and church council member. He passed on his love of the Lord to his children and grandchildren all of whom love the Lord.
Arnold loved the Green Bay Packers and all sports related to Wisconsin. He never missed watching a Packer game on TV and spent hours on the Internet reading every story he could find on the Packers. A highlight for him and his wife was to celebrate their 50th wedding anniversary at Lambeau Field in Green Bay, Wisconsin held by their children.
Arnold is survived by his wife Florence of The Villages, Florida, sons Jeff (Diane), Keith (Cheryl), Craig (Lori), and Neil (Conalee), daughters Pam (Dave) and Debbie (Jim). They are also survived by 11 grandchildren, 11 step grandchildren and 8 great grandchildren. He is also survived by two brothers, Waldo (Lois) and Norbert (Louise).
He was preceded in death by his parents, the Reverend Herman and Marie Laabs, four brothers, Ernie, Paul, Armin and Herman, and four sisters, Norma, Ruth, Doris and Irma.
Memorials may be sent to Hope Lutheran Church, 250 Avenida Los Angelos, The Villages, Florida, 32162.
Arrangements entrusted to Beyers Funeral Home and Crematory, Lady Lake, FL. Online condolences may be left at www.BeyersFuneralHome.com

To send flowers to the family or plant a tree in memory of Arnold Edward Laabs, please visit our Heartfelt Sympathies Store.