To share your memory on the wall of Billy Welch, sign in using one of the following options:

Billy David Welch of Hendersonville, NC, passed peacefully on Oct. 16, 2020 from the infirmities of old age. A member of what has been called “The Greatest Generation,” he was 5 months shy of his 100th birthday.

Born in Albany, Georgia, Billy grew up during the Great Depression and enlisted in the U.S. Armed Forces shortly after graduating from Leesburg High School (Leesburg, FL). The U.S. had just entered World War II, and like millions of other young Americans, Billy heeded his nation’s call. He had dreamed his whole young life of being a military pilot and so was ecstatic when he was accepted into the Aviation Cadet Program of the Army Air Corps (the U.S. Air Force had not yet been established as a separate branch of the military). He received his cherished “Silver Wings” after graduating from Advanced Flight Training and was commissioned into the officer corps as a fighter pilot. Assigned to the 361st Fighter Group of the 8th Air Force, Billy saw combat duty in Europe, flying 83 combat missions in P-47 Thunderbolts and P-51 Mustangs. In seven months, he logged just over 300 combat hours--more hours than any other U.S. fighter pilot at that time. He had participated in three major air battles, including flying three separate missions on D-Day alone. He flew on the first and second of the legendary “one thousand plane” raids, and on three of the raids to Berlin (7-8 hours of flying in a small cockpit at high altitude, on oxygen, and under continuous stress). In recognition of his service, he was awarded the Distinguished Flying Cross two times and the Air Medal three times along with various other medals. Seventy-one years later, the French government inducted him into the French Legion of Honor in recognition of his role helping to free France from Nazi domination.

After the war, Billy tried his hand at civilian life but he soon realized that he was born to be an aviator so he re-enlisted in the Army Air Corps and transitioned to the Air Force when it was formed in September 1947. He spent the next 17-odd years in the Air Force—he was a noted instructor in instrument flying as well as in flying in all kinds of weather conditions, and was one of the Air Force’s first jet instructors. Additionally, he flew atomic-capable jets in the Far East during the Korean conflict and along the U.S.-Canadian border during the Cold War, and later served as an operations officer on the DEW line, watching for Soviet bombers that may try to attack the U.S. by coming in over Canada.

Upon his retirement from the Air Force, Billy settled in his former home town of Leesburg, Florida, where he worked for a while as a salesman for The Silver Sands Company. He was instrumental in obtaining the contract with the fledgling NASA to provide construction sand used in concrete during the early development of the Kennedy Space Center. In recognition of his contribution, NASA inscribed his name in an I-beam at the top of the KSC Vertical Assembly Building.

Billy also ran his own flight training business at Leesburg Airport, over the years teaching more than 400 students how to fly. He was the only person at the airport that could get in any airplane and fly it, even with no prior experience in that type of plane. He was known as “Mr. Airport” and was recognized throughout Florida as one of the best flight instructors in the state. He was also active in Flying Farmers of America, who awarded him for having flown 50 continuous years with no infractions. Billy’s later years were spent in western North Carolina, where he continued flying and instructing as much as possible. He was still flying at age 95, albeit with another pilot along “just in case.”

A graveside service will be held on Friday, Oct. 23, 2020 at 11:00 AM, at Lone Oak Cemetery in Leesburg, FL. Military honors will be rendered by MacDill Air Force Base.

Funeral arrangements are being handled by Beyers Funeral Home in Leesburg. The family asks that in lieu of flowers, donations can be made to the Hendersonville Rescue Mission (Hendersonville, NC), the Leesburg Food Bank (Leesburg, FL), or the Mighty 8th Air Force Museum (Pooler, GA).

To send flowers to the family or plant a tree in memory of Billy David Welch, please visit our Heartfelt Sympathies Store.

We encourage you to share your most beloved memories of Billy here, so that the family and other loved ones can always see it. You can upload cherished photographs, or share your favorite stories, and can even comment on those shared by others.

Posted Nov 15, 2020 at 09:42am
Thank you for sharing Billy's amazing life in his obituary. As one of the 400+ pilots Billy taught, my lasting memory was how calm he was while instructing in the air, even when I gave him reason not to be. While I knew he was a military pilot during WWII, I had no idea of the degree of skill and bravery he displayed while defending our country. I'm pleased to know he continued to enjoy flying into his 90s.

Posted Nov 05, 2020 at 09:02am
Please accept my sincere condolences for your loss.
I had the great pleasure of playing doubles tennis for many years with Billy (along with Tim McFarland and Jim Wooldridge). When you saw Billy play, you understood right away why he was such a fine pilot. We all enjoyed the camaraderie of our games and often shared meals together as well. Now that Billy is gone, I'm the last one left from our group.
Your family has lost a wonderful father, brother, grandfather and great-grandfather, and we know he will be missed.
My heart goes out to you during this difficult time and I will keep you in my thoughts and prayers.
Comment Share
Share via:
LO

Posted Nov 04, 2020 at 08:51am
Sending prayers of strength during this sorrowful time. Thank you Billy for your service!! I work with a good friend of Billy's Ted Logan. I know Ted sends his prayers and thoughts to the family also.
Comment Share
Share via:
DB

Posted Oct 23, 2020 at 11:22am
On behalf of the WNCPA we send our condolences to Billy’s family. He was an active member with WNCPA and will be missed. Thank you Billy for you service to our country and giving so many young pilots their chance to touch the heavens.
Dave Bolser Past President WNCPA
Comment Share
Share via:
NF

Posted Oct 22, 2020 at 11:37am
On behalf of the Board of Trustees, the staff and volunteers of the National Museum of the Mighty Eighth Air Force, we would like to extend our deepest condolences for your loss. Please know the passing of your loved one is felt by all those who honor the Greatest Generation and their sacrifices.
Comment Share
Share via: 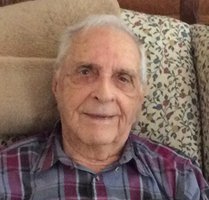