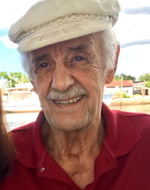 George James Alex Zerbinos, 88, of San Antonio, FL died on October 8th in Tampa, FL after a courageous fight with pancreatic cancer. He is survived by his beloved wife, Gwendolyn (Barbush) Zerbinos.

George was born in Syracuse, NY to Greek immigrants, James and Sofia (Hotis) Zerbinos on New Year’s Eve. Since it was Upstate New York, it was most likely a frigid and snowy day. He was one of 5 children that included Nick, Alex, Eugenia, and Sophia.

His father was in the restaurant business in Syracuse and George quickly learned culinary skills, flipping eggs, crafting sandwiches, and whipping up other Greek diner delights behind the counter. Later in life, he would operate his own restaurant in the Syracuse area.

He would take his early cooking skills with him when he joined the ranks of the Marines during the Korean War. He was tasked with cooking for an entire platoon of young and very hungry service members.

After the service, he would eventually travel around the country and spend many years in California before returning to Upstate New York. He was a “jack of all trades” and worked to fix pool tables, jukeboxes, and even slot machines. Basically if something was broken, George would find a way to fix it.

His youngest sister, Sophia (Zerbinos) LaFountaine, says he loved to take jabs at her and tease her as they got older. She says she absolutely loved his wit, the sound of his uncanny laughter, and his style.

George was always a charmer with the ladies. He was first married in the 1950’s to Marion Furbeck who described him as a “handsome devil” with black, curly hair who always made you laugh. She says he was also a “snappy dresser.” George and Marion had one son, James Marion, who died in 2015 after his own battle with cancer.

In 2012, George reconnected with his daughter, Autumn Bernard, who calls their first meeting as serendipitous when her dad picked her up in a Cadillac (one of her favorite cars). She says while they didn’t know each other their entire lives, they were so much alike and loved his humor that made her “laugh from the gut.” She says she will never forget the moment he walked her down the aisle at her wedding.

For the last 17 plus years, George has spent his life with his love, Gwendolyn Zerbinos. She says simply, “he was the greatest.” They’d go camping in their RV or travel to far-off places like Greece and Israel. They even worked at Disney World together.

Gwen says George was a “marvelous man” who would always wake up before her to cook her breakfast. She said he was quite the cook. Some days, Gwen says, they would shake up a nice cocktail, play some tunes on their jukebox and “dance the afternoon away.”

Funeral services will be held graveside at 11 am on Wednesday, October 14th, at Florida National Cemetery with military honors located at: 6502 SW 102nd Ave, Bushnell, FL 33513. Masks are required due to COVID-19 restrictions.

To send flowers to the family or plant a tree in memory of George James Zerbinos, please visit our Heartfelt Sympathies Store.