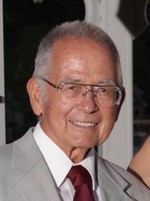 Lawrence J. Nichols, 90, of Venice, Fl passed away peacefully at his home, Sept. 25, surrounded by his loving family. Larry was born in Cabot, Vermont to Edith Menard Rivers and Lawrence Williams Nichols.The oldest son of seven children, Larry was predeceased by his brother Lloyd Nichols and his sister, Dawn Balzanelli of Vermont. He is further survived by his brother, David Nichols and sisters, Penelope Abbott, Priscilla Williams and Dorothy Fitzsimmons all of Florida.
As the oldest sibling, Larry was a natural caretaker of all his children and siblings. His five children counted on his counsel for many things. They loved him dearly and he guided each to successful careers and family life. Soft spoken in demeanor, Larry gravitated to quiet activities like reading, math and playing the violin. His idea of a fun afternoon often involved solving algebraic equations much to the amazement of his grandchildren. An avid volunteer at St. Malachy’s in Burlington, Larry taught catechism for many years.
For more than 40 years, Larry worked as an electrical engineer at Raytheon. He served as an aviation electronics technician in the U.S. Navy. He was an integral part of the team that developed the microwave and was on the Patriot Missile Team. He graduated from Providence College and Northeastern University with multiple degrees. To relax after work, he took up the violin and became proficient enough to play with the Lowell Symphony Orchestra.
Lawrence is survived by his wife, Marie Nichols of Venice, five children, 14 grandchildren and 17 great grandchildren. His children are Lawrence, Jr and his wife, Maria of Woburn, MA; Barbara Riley of Sanford ME; Deborah Trask and her husband, Robert of Sarasota, FL; Janet Heffron and her husband, Brian of Moultonborough, NH; Paul Nichols and his wife, Laura of Burlington, MA.
Condolences may be sent to Marie Nichols, 964 Jolanda Circle, Venice, FL 34285.

To send flowers to the family or plant a tree in memory of Lawrence Joseph Nichols Sr., please visit our Heartfelt Sympathies Store.