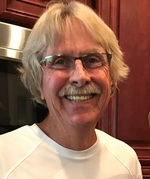 Richard ‘Dick’ Thomas Ripley, age 76, of Leesburg, FL passed away Sunday September 13, 2020 after a very valiant fight against cancer. He was born April 1, 1944 in Detroit, Michigan, the son of Fred and Patricia Ripley, and was raised in Traverse City, Michigan. He resided in various cities throughout Florida for the last 37 years.

Dick served in the US Army, 21st Artillery from 1961 to 1964 stationed in Germany. He loved traveling within the United States as well as cruising various destinations including Alaska and Cuba. He became a scuba instructor and enjoyed scuba diving off the coast of Florida. While residing in Coral Springs, he was passionate about Christmas decorations; with the planning starting months in advance and the decorating starting in September to be ready for the holiday season. The neighborhood competition was fierce but enjoyed by hundreds of visitors each night. It was truly memorable experience.

Dick was passionate about entertaining and loved preparing various meats on the grill or smoker, always cooking a new creation for his guests. The dishes he created were flavorful and the presentation was a work of art. He was a very talented handyman, remodeling several houses where he lived.

There was no pet that he did not befriend. He was a true animal lover and is preceded in death by his two dogs, Coco and Amber.

A celebration of life will be held at a later date along with a service with full military honors at the Florida National Cemetery in Bushnell, FL. Details will be added here as they become available. In lieu of flowers, please send donations to Cornerstone Hospice http://cshospice.org/foundation/giving/


To send flowers to the family or plant a tree in memory of Richard Thomas "Dick" Ripley, please visit our Heartfelt Sympathies Store.