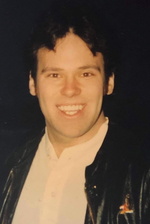 Sterling “Boots” Chapman, 59, of Summerfield, FL passed away on Wednesday, September 2, 2020 at The Villages, FL. Born the 5th of 7 children to Kate (Lisk) and David Chapman, Sterling spent most of his childhood in Hopedale and Franklin, Mass. Later he would venture to Maine, and in recent years, became a Florida resident, with frequent visits to see his family and friends up north. Sterling attended culinary school and had a real knack for cooking. He received his Associates Degree from Washington County Tech and upon graduating worked at Paul’s Restaurant. He was musically gifted, and skilled at playing the drums, guitar, and singing. He had such a sense of humor, stirring up laughter with his words and antics. Sterling had a heart of gold, and a genuine kindness in him that was felt by all who were blessed to have known him. Above all, he loved his children and grandchildren, and shared his love with those he considered family as well.
Sterling is survived by his wife Jackie of Farmingdale, ME; daughters Jeannie Chapman of Bangor, ME; and Penny (Bob) Storey of Daytona Beach, FL; sons David (Kate) Chapman and Sterling David Neptune of Bangor, ME.; stepson Colby Thayer and stepdaughter Dora Thayer, both of Farmingdale, ME; mother Kate Tayes of Wildwood, FL.; sister Eileen (Howard) Hoepfinger of Summerfield, FL,; brothers Richard Chapman of Belleview, FL. and Glenn Chapman of Summerfield, FL; grandchildren Jaydah Stone, Tyler, Hazen and Ezra Chapman, Kayden Royal, Shaye, Sydney, Niko, Meadow, McKenna and Nixon Storey; nieces Linda Grenon, Samantha Chapman, Angelina Potter, Heather Hanson, Jennifer Lares; nephews Ryan Chapman, William Chapman, Brandon Chapman, Ellis Chapman, Joseph DiCamillo, Kenny Dolph, and Justin Chapman; and several great-nieces and great-nephews. He is preceded in death by his father, brothers Gerald and Jacey Chapman, and his sister Diane Chapman.
Sterling had many “Brothers and Sisters from another Mother”, and he was especially fond of “Cocoa Katie” Smiley.
A Celebration of his Life will be held at a later date.
Arrangements entrusted to Beyers Funeral Home and Crematory, Lady Lake, FL. Online condolences may be left at www.BeyersFuneralHome.com

To send flowers to the family or plant a tree in memory of Sterling Hazen "Boots" Chapman, please visit our Heartfelt Sympathies Store.