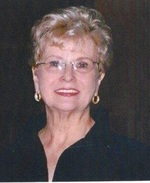 Elma Nelson, 86, passed away on Saturday, August 29, 2020 at the South Campus Care Center in Leesburg, Florida. She was born on May 28, 1934 to Lacy and Bessie Arnold in Sugar Lands, West Virginia.
After the death of their mother Elma moved to Massachusetts in 1946 with her sister, Jean, to live with their older sister and brother-in-law. Elma graduated from Holliston High School in Holliston, Massachusetts in 1952.
Elma traveled to Minnesota in 1953 where she met her future husband, Robin Nelson. Elma and Robin were married in 1954 in Chisholm, Minnesota.
Throughout the years in Minnesota Elma was active in various jobs and activities, including sewing, knitting, making porcelain dolls and gardening. She taught sewing classes for the 4-H club in Mahnomen, Minnesota, as well as working as a smoke chaser for the Minnesota DNR at Link Lake Ranger Station near Bigfork, Minnesota.
She realized her dream of going to beauty school in the later 1960’s.
She owned and operated a beauty shop, boutique, and tuxedo rental while living in Orr, Minnesota, as well as running a small business out of her home making and decorating cakes. She donated her time and cosmetology skills to the Look Good Feel Better program for women diagnosed with cancer.
Elma and Robin moved to Florida after retiring. While in Florida Elma was an active member of the Red Hats. She also continued her love of flower gardening, especially roses. She took music lessons while working at a local music store in Clermont, Florida and enjoyed playing favorite songs on her organ.
Elma is survived by her children, Diana (David) Baraga, Steven Nelson, Christopher (Pamela) Nelson, and three step-grandchildren, Illiandra Burney, Xain Burney, and David Burney. She is also survived by her sister Jean Blanchette.
Elma is preceded in death by her husband Robin Nelson. She is also preceded in death by her parents, Lacy and Bessie Arnold, and siblings, Ray Arnold, Roy Arnold, Theodore Arnold, Donald Arnold, Geraldine Travis, and Delmer Arnold.
Interment will be at Carpenter Cemetery in Bear River Minnesota. Services for immediate family will be held at a later date.
Arrangements are with the Beyers Funeral Home, Leesburg FL. www.beyersfuneralhome.com

To send flowers to the family or plant a tree in memory of Elma Nelson, please visit our Heartfelt Sympathies Store.