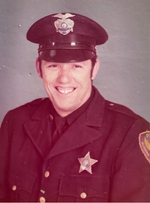 Michael Charles Harkins Sr. (76) of Leesburg, Florida passed away on June 18, 2020 at Moffitt Cancer Center in Tampa, Florida after a courageous fight. He was born May 8, 1944 in Aurora, Illinois.

Michael is survived by his dear wife of 55 years, Janet; his children, Michael C. Harkins Jr. (Deborah) of Dekalb, IL and Lori Harkins of N. Aurora, IL. He was also blessed with grandchildren Jacob Comstock, Jessica Comstock, Billie Moffett (Robert) and Thomas Johnson. He is also survived by his sister Patricia Hansen (Dale), several nieces, nephews, cousins, and his beloved dog, Harky. He was preceded in death by his parents, Francis and Rose Harkins.

Michael served the City of Aurora, IL as a policeman for 27 years, working in Crime Prevention and many years of Community Service. He was a member of the F.O.P. and the Police Benevolent & Protective Association, and worked Mutual Ground Inc. He loved life and spending time with his family and friends. Automobiles, racing, and NASCAR was his lifelong passion. Michael owned his own body shop and eventually found his way to Chicagoland Speedway where he worked for 15 years. In retirement, Michael and Janet relocated to Florida where they enjoyed boating and everything retirement had to offer. He will be remembered greatly for his great wit and storytelling. Michael will be remembered by those he loved and by all lives that he touched.


To send flowers to the family or plant a tree in memory of Michael Charles Harkins Sr., please visit our Heartfelt Sympathies Store.