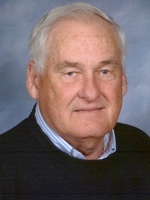 Dr. William McArthur “Bill” Dannelly, Sr. of Lady Lake passed away peacefully on Tuesday, June 16, 2020 in Leesburg, at the age of 84.
He is survived by his wife of 59 years, Kathryn; his devoted dog, Biscuit; four children, Bill Dannelly (Kayla) of Peachtree City, GA, Pat Dannelly (Kristi) of Crownsville, MD, Carol O’Kelley (Brooks) of Dunwoody, GA, and Pam Seegars (Joe) of Dunwoody; a brother and sister-in-law, Jim and Bobbie Dannelly of Grady, AL; thirteen grandchildren, Alexandra Peck of New York, NY, Ryann Dannelly of Jersey City, NJ, Virginia Dannelly of Atlanta, GA, Hanna Dannelly of Philadelphia, PA, Sarah-Catherine Dannelly of Atlanta, Jack Dannelly of Baltimore, MD, Owen Dannelly of Crownsville, Cate O’Kelley of Dunwoody, Gretchen Seegars of Dunwoody, Mick Dannelly of Crownsville, Davis O’Kelley of Dunwoody, Mac Dannelly of Peachtree City, and Henry Seegars of Dunwoody; and 16 nieces and nephews.
Dr. Dannelly graduated from the University of Alabama in 1957 with a Bachelor of Science in Chemistry, and then studied dentistry at the University of Alabama School of Dentistry, where he was a member of Omicron Kappa Upsilon, an honorary dental society, graduating in 1961. He was commissioned as a Lieutenant in the United States Navy, and served on the dental staff of the U.S. Marine Corp’s Recruit Depot at Parris Island. He earned a Naval award for Outstanding Performance of Duty for his service on the USS Yellowstone, then based at Mayport in Jacksonville. Following an honorable discharge at the completion of his duty, Dr. Dannelly matriculated at the St. Louis University School of Dentistry, where he earned a degree in orthodontics in 1967.
Dr. Dannelly founded Lake County’s first orthodontic practice in 1967, practicing in Leesburg until his retirement. He also practiced in Ocala.
He was a lifelong member of the United Methodist Church, worshipping at Community United Methodist Church in Fruitland Park until his death.
A private service for his immediate family will be held later this month. In lieu of flowers, the family requests donations to the Florida United Methodist Children’s Home at 51 Main Street, Enterprise FL 32725.
Arrangements entrusted to Beyers Funeral Home and Crematory, Lady Lake, FL.