In Memory of
Retired Lt. Col. Dale A.
Stevens
1944 - 2020
Click above to light a memorial candle.
Memorial Candle Tribute From
Beyers Funeral Home and Crematory
"We are honored to provide this Book of Memories to the family."
View full message >>>
Send Flowers
Menu 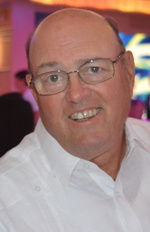 Retired Lt. Col. Dale A Stevens passed away June 1, 2020 at the age of 75. Also known as “Big D” or “Balboa,” Dale was a loving husband, father and grandfather. Immediate comments following his death described him as a “legend” who “always brought his ‘A’ game.”
Big D served 23 years in the U.S. Air Force beginning his military career as a meteorologist. He said he was giving a weather briefing to a group of pilots when he thought to himself, “I should be on the other side of this podium.” He served in Vietnam and Grenada, where he airlifted the first KIA off the island. He once debriefed Jordan’s King Hussein, played golf with the sitting Argentine president and escorted the Dallas Cowboys cheerleaders on a USO Tour. Twice.
He was born in Stuttgart, Ark. to Russell Colby and Elizabeth Bodwell Stevens, the oldest of three boys. While the Stevens’ moved often, Dale adapted by combining an easy-going personality with a fierce love of sports and competition. He once caddied in a foursome that included Mickey Mantle and Whitey Ford, and carried that love of sports over to his four boys, all of whom were subjected to occasional Terry Sanford High School barks or calls of “Taxi!” at various sporting events.
Balboa played freshman basketball at Oklahoma University (somehow), won two low net Air Force Base Golf Championships, won tennis tournaments at the Argentine ambassador’s, and probably used up the family allotment by making eight holes-in-one. Eight.
After his military service, Dale retired to Fayetteville N.C., where he served as the Flight Captain of the Daedalians Club, the premier fellowship for military aviators. At Gates Four Golf and Country Club he continually bedeviled his playing partners with a fearsome putting stroke and a knack for arriving at the course approximately 90 seconds before teeing off.
After spending 18 years in his second career as a flight simulator instructor at Pope Air Force Base, Big D and wife Cathie retired to The Villages, Fla. where he played golf 300 days a year, volunteered at the Christian Food Pantry and the Coffee Bar at the North Lake Presbyterian Church.
Dale immersed himself in the numerous clubs at The Villages, was president of the Oklahoma Sooners fan club and the Retired Military Family group, and member of the Louisiana Club, New York Yankees club and the Vietnam Vets club.
The most exclusive club, though, was “Camp Big D and Gigi.” Five consecutive summers, Dale and Cathie entertained their grandchildren with arts and crafts, dancing at the square, multiple golf cart rides and probably a few too many evenings at Scooples, the local ice cream shop.
Dale never met a stranger, wore his heart on his sleeve and was generous with both his time and his money. He twice arranged and paid for Disney Cruises for all 15 member of his sons’ families and was planning the next trip with granddaughters Johanna and Walker. They were probably angling for another Disney Cruise.
Instead, we will be planning Celebrations of Life to honor Dale who would want his passing to be a time of gathering and joy. And maybe a cherry-drenched Manhattan.
Dale was preceded in death by his parents, Russ and Betty, and brother Peter. He is survived by his loving wife, Cathie, his four boys and their wives, Tom and Kate, Brian and Leslie, Scott and Colleen, Kenny and Nicole, his seven cherished grandchildren, Johanna, Walker, Charlie, John, Patrick, Madeline and Daniel, and his brother Russell and sister-in-law Sheila.
In lieu of flowers, the family requests donations be made in Dale’s honor to the Daedalians Scholarship Fund or the Christian Food Pantry.


To send flowers to the family or plant a tree in memory of Retired Lt. Col. Dale A. Stevens, please visit our Heartfelt Sympathies Store.