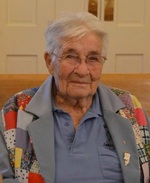 Doris M. Graves, 101, (or, as she proudly stated, 101 and a half) took her final journey on May 20, 2020 in Lady Lake, Florida, where she had spent winters since 1973. She was born on October 28, 1918 in Utica, New York to Walter and Menoa McKie. On January 7, 1942 she married Charles Graves. Together they owned and managed a dairy farm on Tanner Hill in Norwich, NY until their retirement in 1970. She graduated from Norwich High School in 1935 at the age of 16 and went on to a myriad of jobs that only served to advance her vast knowledge, which served her well as she related her many experiences with her wonderful ability as a storyteller.

In addition to the farm, Doris was well known for her chair caning, which she took great pride in and taught classes in for many years. She also took pleasure in crocheting and knitting items to be donated to under-privileged children and charities, as well as her love for quilting.
Doris always claimed that when she reached 100, she would retire: she never did. Until the very end, she was still instructing her caning students and crocheting items for the Ronald McDonald House.

Anyone who knew Doris would agree that her thirst for travel, adventure, interests and stories of same were far too numerous to list individually, but she leaves many fine memories to be treasured.

Doris is survived by two sons, Harry and Arthur Graves Norwich, NY, a daughter, Jessie Golden of Oxford, NY as well as five grandchildren, Timothy Golden of Oxford, NY, Shari (Joe) Hicks of Hedgesville, WV, Michael (Angela) Golden of Oxford, NY, Andrew Graves of Charlotte, NC and Arthur (Kai) Graves of Portland, OR. A sister and brother-in-law, Esther and John Graves of North Norwich, NY and a sister-in-law Mildred McKie of South New Berlin, NY, a special “adopted daughter” Judy Thompson of Ocala, FL. Ten great grandchildren and many nieces and nephews also survive. She is predeceased by her parents, her husband Charles, a brother, Albert McKie, and a son-in-law, Sonny Golden.

A celebration of life will take place at a later date.


To send flowers to the family or plant a tree in memory of Doris Graves, please visit our Heartfelt Sympathies Store.