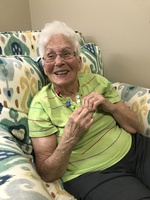 Nellgene Stanley Wallace was a loving and devoted wife, mother, grandmother, great grandmother, friend and prayer warrior. Her “Divine Departure” was May 11, 2020, at the age of 92, with her family by her side.

She is survived by three daughters: April Nixon (Gary), Jill Chapman (Jack) Kimberly Jo McCarraher (Mac); three grandchildren: Kelly Nixon, Lauren Gawor, Kyle Holmes; and three great grandchildren: Kylie Holmes, Gus and Rue. She is preceded in death by her husband, Dana Wallace.
Nellgene was born August 11, 1927 in Dunbar, West Virginia. She was devoted to the Lord and had a love for music. If the church doors were open at First Baptist Dunbar, she was there. Nellgene sang in the church choir, played the piano, and gave piano lessons to members of her community. She was also a clarinetist in the marching band at Dunbar High School.

After attending the University of Miami and Virginia Intermont College, she moved to Ft. Lauderdale, Florida in 1956. Nellgene worked for the Broward County School Board for more than thirty years, touching many lives along the way.

Nellgene enjoyed teaching Sunday School, spending time with her family and friends, traveling and quilting. Her true joy was singing, and her favorite songs were of course, church hymns. She had the voice of an angel, even in her later years, and loved spreading the gospel through song. Her selfless nature and beautiful voice will forever remain in our hearts. Nellgene asked for so little, but gave so much…a true testament to her Christina faith.

There will be a Homecoming Celebration for her family held at a later date.
The family would like to thank CERTUS and Compassionate Care Hospice for their loving and tenderhearted level of care.

To send flowers to the family or plant a tree in memory of Nellgene Stanley Wallace, please visit our Heartfelt Sympathies Store.