To share your memory on the wall of John Parker, sign in using one of the following options:

Provide comfort for the family of John Parker with a meaningful gesture of sympathy.

There are no events scheduled. You can still show your support by sending flowers directly to the family, or planting a memorial tree in memory of John "Jack" Parker.
Plant a Tree

We encourage you to share your most beloved memories of John here, so that the family and other loved ones can always see it. You can upload cherished photographs, or share your favorite stories, and can even comment on those shared by others.

Posted Apr 06, 2020 at 12:17pm
So sorry to hear of Jack's passing. Although I didn't get to know him for very long, I am so very glad that I did get to spend some time with Jack. He was always very welcoming to me when I was spending time with Kathy. My heartfelt thoughts for all of you.
Comment Share
Share via:
EF

Posted Apr 02, 2020 at 02:24pm
Sorry to read of your passing, Jack; my condolences to Kathy and your family. I believe that one of your favorite pickelball players, my Uncle Ken Cross, needed a partner for doubles in the Heaven League, and put out a request for you. It took a few years for you to be ready, but of all the players he enjoyed, I'm sure he was happy to meet you on the court again. God Bless!
Ed Frappier
Mera Mesa 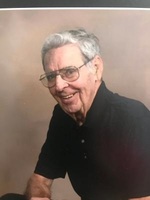