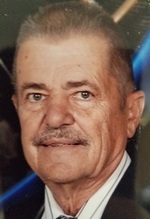 Richard H. Fink, 87, of Florida passed away on Sunday, March 22 surrounded by his loving family.

Richard was born in Manchester, PA to Charles and Cora (Myers) Fink. He attended local schools and advanced his technical machinist training at Brown & Sharpe. He served his country in the US Army. Richard owned R.H.Fink, Inc. for over 50 years, providing production and tool and die services. His ingenuity resulted in several patents and unique solutions to difficult challenges. He was a gun enthusiast and member of the National Rifle Assoc. His love of the outdoors and adventure included; hunting, dirt and road motorcycling, scuba diving and bowling. He and Trudy completed a cross country motorcycle trip after their retirement. His love of family and generosity will be deeply missed by family and friends.

Richard is survived by his beloved wife of 61 years, Mabel “Trudy” Fink. He leaves daughters Christine (Alex) Kovach and Joann (Therman) Simmons, both of S. Carolina, daughter Amanda ( John) Rambler and son Michael (Colleen) Fink of York, PA. Richard also leaves six grandchildren, one great-grandchild and three sisters. He was predeceased by his daughter Cindy Gaetjen, his sister and brother.
A memorial service will be held at a later date. Donations in his memory may be made to: The American Red Cross.

This obituary is protected by copyright by Leesburg. Proudly Serving the Communities of Leesburg, The Villages, Lady Lake, Umatilla, Bushnell, Astor, Lake County, and Sumter County. Leesburg is located in the state of Florida, United States.