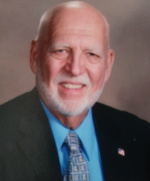 Dac Anton Christman, 82, left his life on this earth on March 21, 2020. He was born on December 15, 1937 in Canton, Ohio. He lived in the North Canton area. Dac was a graduate of Middlebranch High School class of 1956. He became a union electrician IBEW #540 and worked the last 20 years of his career for WW Schaub Electric as Supervisor of Electricians at Timken Research. He was a longtime member of North Canton Community Christian Church where he served as an Elder, Deacon, and on several committees. He was a member of North Canton Eagles, Elks, Senior Golf, and Wireman’s Golf Assoc. For the past 4 years he has spent his winters at Water Oak Resort in Lady Lake, Florida where he played golf and made many friends. He will be missed by many for his ready smile, handshake, and hugs.
Dac suffered an Abdominal Aortic Aneurysm while on the golf course on February 15, 2020 and was life flighted to UF Shands Hospital in Gainesville, Florida where he amazed us all by surviving 4 surgeries and giving us hope he would come home to us. His spirit was stronger than his body and it returned him to God. That strong spirit will sustain us the hours, days, and weeks we are granted.
His memory will be cherished by the love of his life and best friend, Karen LeBeau Stahler, his daughters Denise Blackwood (Tim Hawkins) of Dellroy, Deena Kimmel (Rob) of Lakeland, and Deidra Harrison (Jim) of North Canton. He had 5 grandchildren, Eric, Matthew, and Lucas Kimmel and Zachary and Emmilee Harrison. He had 3 sisters, Daun Williams of Barberton, Dana Mears of North Canton, and Darla Schmeltzer of Florida. He was predeceased by his brother David Christman (Nancy) of Hartville, and his parents, John and Betty Christman.
Per his request there will be no formal service. He will be cremated and his ashes scattered as he wished. Donations may be made to North Canton Community Christian Church in North Canton, The North Canton Heritage Society, or the charity of your choice.