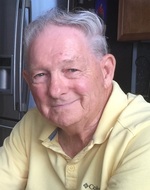 Bobby Joe Owens, 83, passed away peacefully on Wednesday, March 18, 2020 in Summerfield, Florida.
Bobby was born June 20, 1936 to Burris and Palmer (Tripp) Owens in Greenville, South Carolina. As a young man, he served his country as a member of the United States Army, Air Force, and Navy. While stationed at the Grand Forks Air Force Base, he met the love of his life, Patricia Ann Guerard. On August 7, 1958, they were married at Sacred Heart Catholic Church in East Grand Forks, Minnesota. This August, they would have celebrated 62 wonderful years of marriage. They raised three children together.
Bobby worked 39 years for the City of Grand Forks, retiring in 2001 as manager of the Grand Forks Civic Auditorium. Upon retirement, his dream of moving south became reality when he and Pat relocated to Ocala, Florida.
Bobby’s most treasured memories are the years he and Pat spent at their Ocala home, enjoying the sunshine, their pups, and frequent visits from family and friends.
Left to miss him are his wife, Pat; his children, Barry Owens of Ocala, FL, Robin (Robert) Flurer of Bismarck, ND, and Pam (Ken) Roebuck of Rochester, MN; six grandchildren, Zachary (Chelsea) Flurer, Andrew (Rachel) Flurer, Jenna (Henry) Macken, Katey (Michael) Bethune, Abbie Roebuck, and Isabelle Owens; and seven great-grandchildren.
He was preceded in death by his parents; his father-in-law, Willard Guerard; his mother-in-law, Eugenia Guerard; three sisters and three brothers.
A family graveside service will be held at Florida National Cemetery in Bushnell, FL with military honors at a later date.
Blessed be his memory.
Arrangements entrusted to Beyers Funeral Home and Crematory, Lady Lake, FL.

To send flowers to the family or plant a tree in memory of Bobby Joe Owens, please visit our Heartfelt Sympathies Store.