In Memory of
John Wendell "Jack"
Hill
1938 - 2020
Click above to light a memorial candle.
Memorial Candle Tribute From
Beyers Funeral Home and Crematory
"We are honored to provide this Book of Memories to the family."
View full message >>>
Send Flowers
Menu 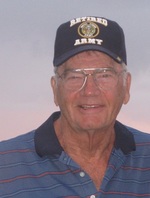 John “Jack” Wendell Hill passed peacefully from this life at Lady Lake Specialty Care on March 17, 2020. He was born in Logan, West Virginia, on July 26, 1938. His family later moved to Newport, Kentucky where he graduated from Campbell County High School. He then went on to receive an Education Degree from Eastern Kentucky University. He was a member of ROTC and Pershing Rifles. Upon graduation, he was commissioned into the Army. He served on active duty for seven years completing tours in Germany and Vietnam. He then returned to EKU to earn a Master’s Degree in Education.
He moved to Cincinnati, where he continued to serve in the military as a reservist with the 2075th USARF School, and rose to the rank of Lt. Colonel. At one point he was the Assistant Commandant of the unit. He also taught Industrial Technology at Mason and Princeton High Schools.
On the advice of his Army Buddy, Col. Jim Snow, in 1998 he purchased a lot in The Villages, FL sight unseen! In 2004, upon retiring from teaching, Jack and his wife, Betty, moved to The Villages. He enjoyed golfing, trips in the R.V., excursions with the Mustang Club, and poker with his neighbors. He also belonged to the Kentucky Club.
Jack was a member of The Grand Lodge of KY, F. & A. M., The Louisville-DeMolay Commandery No. 12 Knights Templar, Ancient and Accepted Scottish Rite of Free Masonry, SJ, USA, Disabled American Veterans, and The Vietnam Veterans Club.
He is survived by Betty, his wife of 42 years. He also has three daughters: Jacqueline Jordan (St. Louis), Paisley Higgins (Jim) (Walton-Verona, KY), and Betsy Chance (Philip Doan) (Lebanon, OH). His sister and brother-in-law, Carol and Fred Theler (The Villages, FL). He has many grandchildren and great grandchildren, nieces and nephews throughout the U.S. His 97 year old mother-in-law, Carolyn Congleton (Barbourville, KY), along with his sister-in-law’s, and their families.
Jack had a strong work ethic. He had a great sense of humor and made us all laugh. Who could forget him coming down the spiral staircase on his 40th birthday wearing his swim fins and snorkel? His Ohio neighbors nicknamed him “Jack Travolta”. He is greatly missed. “At Ease, Soldier”. Rest in Peace.
The family wishes to thank Lady Lake Specialty Care and Cornerstone Hospice for their loving care. A memorial service will be held at a later date. Memorial gifts may be made to: Michael J. Fox Foundation, P. O. Box 5014, Hagerstown, MD 21741-5014; Operation Shoebox The Villages, c/o Camille Gieck, 17481 SE 76th Flintlock Terr., The Villages, FL 32162; Villages Cornerstone Hospice House, 2445 Lane Park Rd., Tavares, FL 32778; or charity of your choice.
Arrangements entrusted to Beyers Funeral Home and Crematory, Lady Lake, FL.

To send flowers to the family or plant a tree in memory of John Wendell "Jack" Hill, please visit our Heartfelt Sympathies Store.