In Memory of
Roland N.
da Silva
1929 - 2020
Click above to light a memorial candle.
Memorial Candle Tribute From
Beyers Funeral Home and Crematory
"We are honored to provide this Book of Memories to the family."
View full message >>>
Send Flowers
Menu 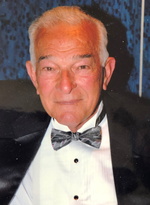 Roland N. da Silva
Our loving husband, father, grandfather and brother Roland da Silva, aged 90, of The Villages, FL, danced into heaven on Friday, March 13, 2020.
Roland is survived by his wife of 57 years, Anna J.; his two daughters Monique Moore and husband Michael of Merrimac, MA, and Esther da Silva and husband Todd Huntley of Long Ditton, England; his sister Thelma da Silva of Hinchley Wood, England; and his five grandchildren Colleen, Molly, and Fiona Moore, and Cole and Ike Huntley. He is preceded in death by his son Colin.
Roland and Anna J. met on the dance floor and never stopped dancing. An avid reader, he wrote his memoirs in his eighties, chronicling a passion for learning and travel, and most of all love and pride in the family he built with his beloved wife.
Born in British Guyana and a graduate of Syracuse University, Roland joined Royal Dutch Shell on the island of Curacao. His career at Shell culminated in leadership positions in Organizational Development in Curacao, the Netherlands, and Scotland. After retirement, Roland and Anna J. moved to Skidaway Island, GA, where Roland became a tax consultant at H&R Block while consulting for Shell on projects in the Caribbean and Latin America.
Roland enjoyed club involvement and leadership, starting by establishing and assuming the presidency of the Curacao Bicycle Club and moving on to presidencies of the Curacao Golf Club and the Asiento Sailing Club. He moved to The Villages in 2004, where he became president of the Southside Villages Bicycle Club.
Of his many organization memberships, he particularly enjoyed being named Rookie of the Year at age 61 for The South Side Landings First Responders and Firefighters, and he took pride in being a member of the Bridgeport Men’s Group. Most of all, he enjoyed the official title of Opa, or grandfather.
A date for the Celebration of Life will be announced at a later time.

To send flowers to the family or plant a tree in memory of Roland N. da Silva, please visit our Heartfelt Sympathies Store.