To share your memory on the wall of Donald Widmann, sign in using one of the following options:

Don’s professional career began as a biologist with the Florida Game and Fish Commission. Later in life, he worked in the field of industrial chemical sales with companies including Penray and Nalco.

Don was an active member of the Church of Jesus Christ of Latter Day Saints. He attended the Leesburg Florida Ward and served faithfully in various teaching and leadership positions in the church.

He enjoyed the outdoors, especially the sport of duck hunting. He was proficient in many things in life but lucky for the ducks, his aim was not one of those things. However, even without hitting a target, he could simply enjoy being surrounded by nature.

We will remember his love of family and conviction of faith as we have relied upon him often to provide comfort and counsel. We will also remember his very large sense of humor that has made us all laugh, often uncontrollably. Remembering and sharing our memories of Don will always bring a smile to our face and laugher in our hearts. We love and miss you, DCW.
Read Less

To send flowers to the family or plant a tree in memory of Donald Carl Widmann II, please visit our Heartfelt Sympathies Store.

We encourage you to share your most beloved memories of Donald here, so that the family and other loved ones can always see it. You can upload cherished photographs, or share your favorite stories, and can even comment on those shared by others.

Toni and David Hayden sent flowers to the family of Donald Carl Widmann II.
Show you care by sending flowers

Posted Feb 19, 2020 at 02:52pm
We will always remember Don for his happy personality and never ending smile. He added so much to our class at Stranahan High School and will be greatly missed by all of us who were fortunate to know him.
Mike and Christy (Boxwell) Blocker
Comment Share
Share via:
HS

Posted Feb 17, 2020 at 10:23am
Our hearts are so sad but we know that heaven is a happier, funnier place now. Grateful for the love and service of this good man. We love you all!

Flowers were purchased for the family of Donald Widmann. Send Flowers

Flowers were purchased for the family of Donald Widmann. Send Flowers 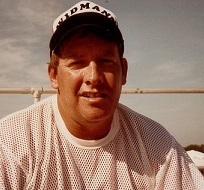